This op-ed was originally published in the Winnipeg Free Press on Wednesday, November 2, 2022: "Throne speech must focus on health care". 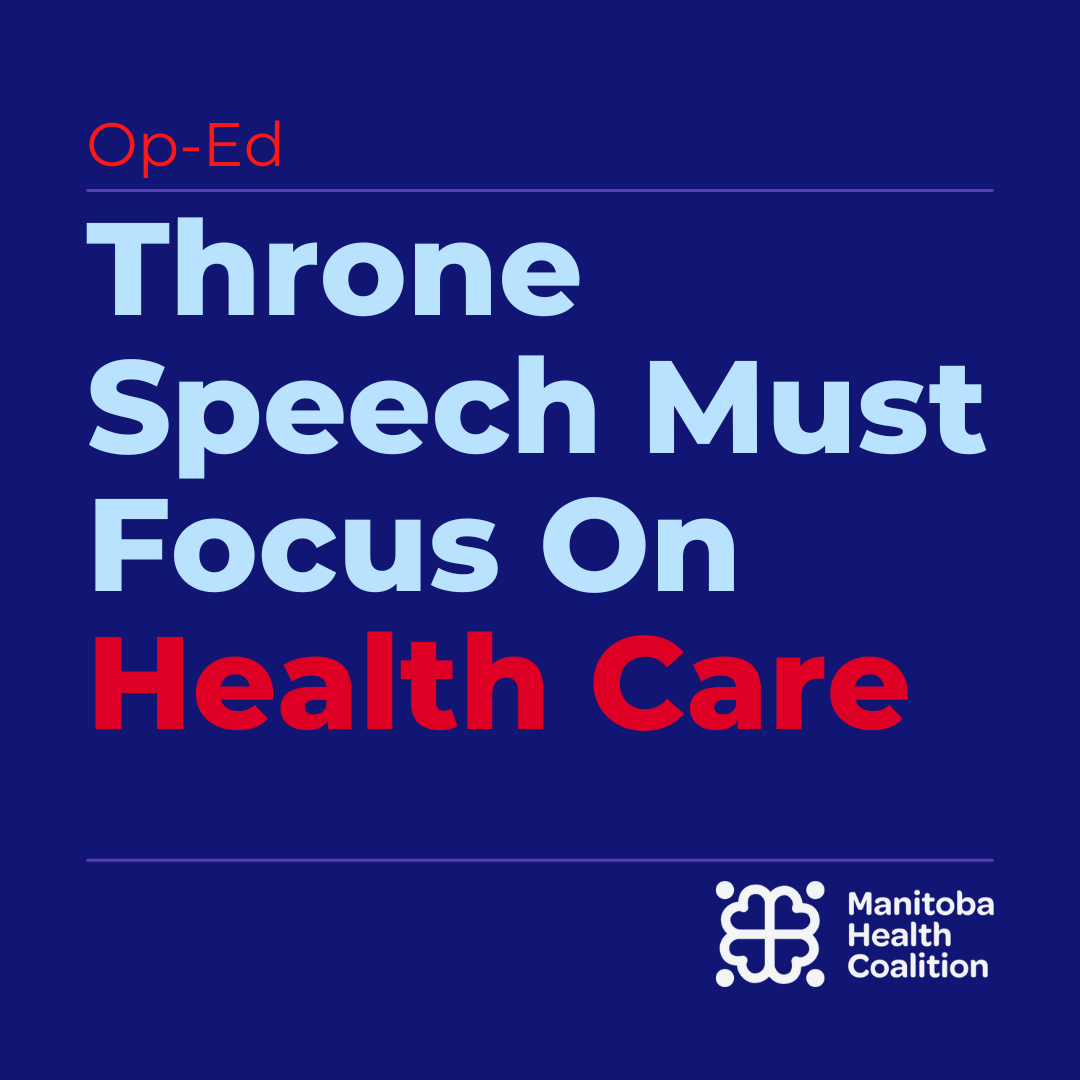 In November, our new Lieutenant-Governor Anita Neville will deliver the Speech From The Throne. This Throne Speech will be the second under Premier Heather Stefanson, and the last before the next provincial election scheduled for October of next year. The Manitoba Health Coalition believes it is vitally important that the government use this moment to address the staffing crisis facing Manitoba’s hospitals, clinics, Personal Care Homes and home-based services.

The decision to appoint both a special advisory committee and a working group on “tax competitiveness” should be reversed. In its place, we propose a committee of physicians, nurses and other frontline healthcare professionals be struck to address the staffing crisis. Any half-measures announced between now and November 15 will not carry the weight nor credibility necessary to rebuild the confidence Manitobans should feel when they are accessing medical care in our public system.

Premier Stefanson served as  Brian Pallister’s health minister during the deadly third wave of COVID-19 when 57 COVID-19 patients were sent out-of-province for treatment; 12 of those Manitobans died far away from their homes. Our hope all along has been that the experience as health minister dealing with the real-world impact of Pallister-era cuts to emergency rooms, critical care capacity and seniors care would give Premier Stefanson an understanding of the importance of listening to frontline healthcare workers.

Despite some positive words in the November 2021 Speech From the Throne, Budget 2022 did not offer any relief to Manitoba nurses, doctors or other healthcare professionals - nor to their patients. As detailed at the time in this paper by columnist Tom Brodbeck: “[H]ealth care spending will only rise a paltry 1.6 per cent this year, to $6.687 billion from $6.582 billion. It’s not much considering the massive surgical and diagnostic backlog, the severe shortage of front-line staff, and the record wait times in hospital emergency rooms.”

Budget 2022 inadequate health spending made it clear that fixing the mess caused by Pallister-era cuts to healthcare would not be a priority for the Stefanson government. Instead, they funded health below the rate of inflation and moved ahead with deficit-financed tax cuts that mostly benefit the wealthiest individuals and corporations in Manitoba. This choice - unfunded tax cuts over investment in public healthcare - has provoked a full-on crisis.

Consider events of just the past month:

In response to the chaos inflicted by her government's choices, Heather Stefanson is calling on the Trudeau government to increase its share of healthcare funding. It is remarkable to watch a political leader undermine their own case so frequently and substantially. The Manitoba government has pursued over $1 billion in tax cuts while running deficits, enduring a global pandemic and ignoring repeated pleas for urgent healthcare investment. Canada’s premiers may have a credible case to make - but it cannot be made by Manitoba’s premier.

Instead of focusing on further irresponsible tax cuts during a healthcare crisis and deflecting to other levels of government, the Manitoba government must take real, sustained and immediate action. We are concerned that the current crisis will escalate and deepen. This year’s Speech From The Throne must be a serious document dedicated to facing the true scale of the crisis we are facing, making the investments necessary to fix it and ending the damaging tax cut agenda that has created these unique conditions.

Manitobans want and deserve a public healthcare system that is there for them when they need it. If the government does not reverse course by the time Her Honour Anita Neville delivers her maiden speech, they will not do so prior to the next election. The die will be cast.

And with it, a huge gamble on the fate of the healthcare system on which we all rely.

Thomas Linner is the Provincial Director of the Manitoba Health Coalition, a non-profit, non-partisan organization dedicated to the protection and expansion of public health care in Manitoba mbhealthcoalition.ca