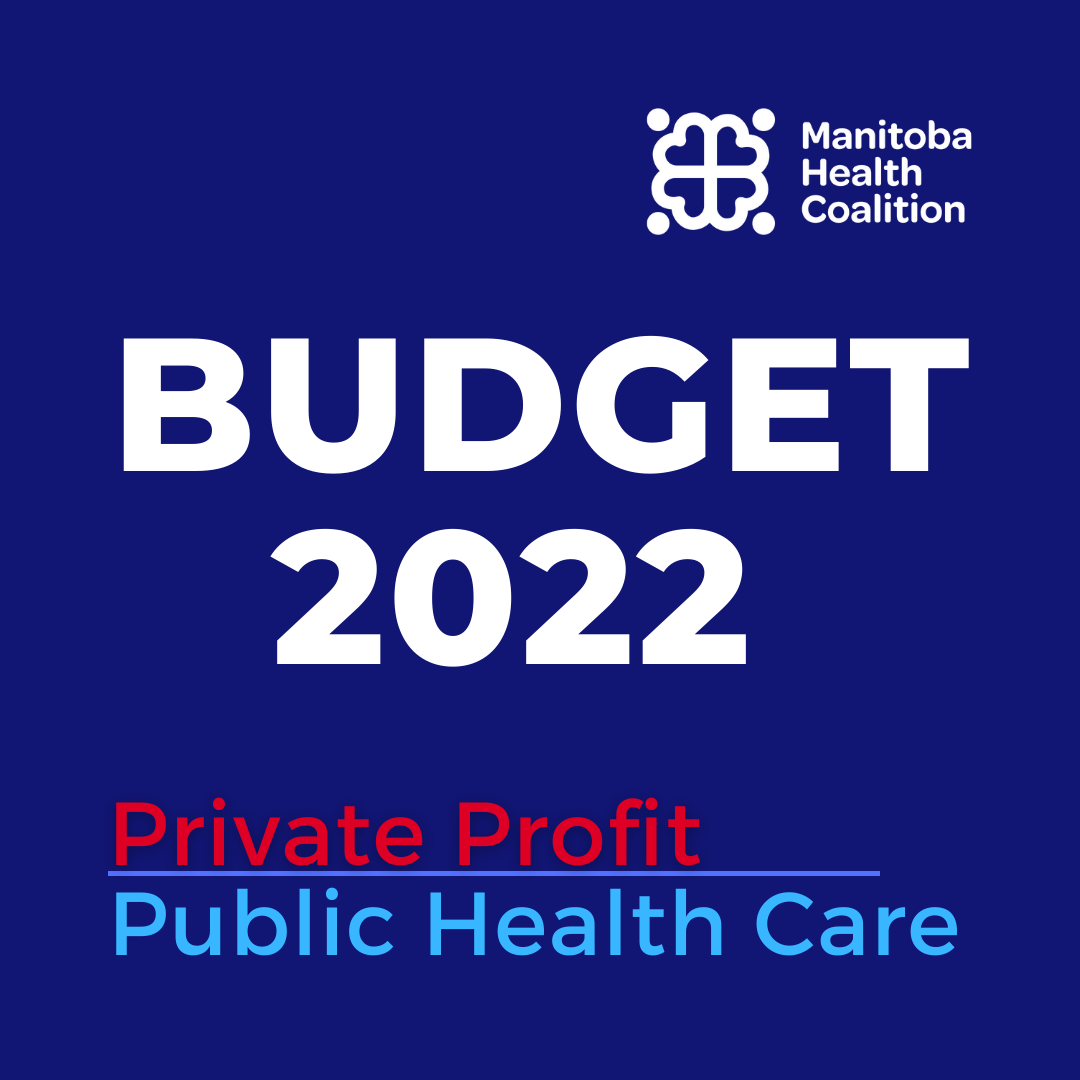 Premier Heather Stefanson began her tenure with a promise to listen to Manitobans. Her predecessor, Brian Pallister, had become identified with the chaos in Manitoba's healthcare system and its often contradictory, and at times confrontational, pandemic messaging and policy. As premier, Pallister led these initiatives from the front. When he decided to step aside, few doubted that health care had led to his political demise.

Long before the pandemic, Manitoba's Healthcare system was in crisis due to government austerity, leading to a massive trust gap with the public when it comes to health care. A recent Probe Research poll commissioned by the Manitoba Health Coalition (MHC) and published in the Winnipeg Free Press concluded that 67% of Manitobans believe the Pallister-era reforms (such as the closing of Winnipeg ERs and cutting critical care capacity) weakened the province’s response to COVID-19.

Budget 2022 was a clear opportunity to begin repairing the damage done by cuts to health care and compounded by the pandemic. Premier Stefanson stood beside her predecessor every step of the way. She had served as Minister of Health during some of the most difficult moments of the pandemic. She was in the perfect position to show a new face to the current government when it comes to health care: Contrite in acknowledging the mistakes of the past, determined to shape a new path in a spirit of openness and collaboration.

In its Budget 2022 communications, the Stefanson government has emphasized a (potentially misleading) overall spend of $7.2 billion for health care. (Budget Speech, Pg. 6) Even taken at face value, and as presented, this increase does not keep up with inflation (a roughly 4% year-over-year increase set against inflation of 7.4%). Even if these spending levels are reached, Budget 2022 forecasts a 2.9% increase to health authorities for the operation of personal care homes and a meagre 1.7% increase for home care. These are effectively cuts to our seniors - those who have suffered the most throughout the pandemic. And it will only exacerbate the staffing crisis in seniors' care.

Budget documents are positively lyrical in their description of the $110 million spend to address the surgical and diagnostic backlog:

All of us know someone on a waitlist for surgery or a diagnostic test and we know how difficult it has been for them.

As resources were redirected to address COVID-19, wait times increased.

As a result of this backlog, we hear the stories of Manitobans.

From the senior waiting for cataract surgery.

From the parent struggling with chronic pain as she waits for a shoulder replacement.

From the worker in debilitating pain, waiting for spine surgery.

Madam Speaker, our government is listening. And we are getting Manitobans the care they deserve.

It is time for Manitobans to STOP waiting and START living.

No one can suggest that $110 million is not a lot of money. But it is certainly not going to eliminate the backlog in a timely manner, nor provide Manitobans with a timeline for when they can expect the backlog to be removed. And rather less is made of the fact that a similar amount, $105 million, is allocated to:

“Significant changes in departmental expenditures include a $105 million or 1.6 per cent increase in Health reflecting on-going requirements as part of the wage settlement reached with Manitoba Nurses Union and other increases in medical remuneration, Pharmacare and provincial health services.”

As a centrepiece item in a $7.2 billion spend, the impact does not seem commensurate to the scale of the problem - and the hurt - Manitoban families are hurting. In fact, the funding to address the surgical and diagnostic backlog appears to be devoted to private profit, rather than to the public health care needs of Manitoba families:

“A Request for Services process that will allow existing Manitoba providers and potential new entrants to undertake additional procedures. The government will also explore additional opportunities with clinical providers and organizations throughout Manitoba so this additional capacity can be harnessed to deal with the backlog in a more timely way. Work is also underway to collaborate with out-of-province providers for some needs that are emerging due to waitlists that cannot be addressed in a timely manner.”

This runs entirely contrary to the desires of Manitoba families, and the long-term sustainability of Manitoba’s surgical and diagnostic capacity. While some steps are to be applauded (such as the Anesthesia Clinical Assistant Program, $4.5 million over two years), the continued reliance on private and out-of-province operators won’t add capacity to Manitoba’s public system, won’t tackle waitlists and won’t save money. In the polling conducted by Probe Research on behalf of MHC referenced earlier, 68% of Manitobans believe the answer to ongoing backlogs and waitlists is to invest in the public system over privatization and contracting out.

Moreover, the Winnipeg Free Press has revealed that funds previously allocated to the surgical backlog were instead used for routine health procedures. This does not instill confidence that Budget 2022 funding will be used appropriately. The nature and frequency of this type of revelation make it difficult to trust the accuracy of budget documents. It is a disappointing pattern that further undermines the confidence of Manitoba families and frontline health care professionals. It makes it hard to celebrate other welcome initiatives such as the first steps to building back acute care capacity previously removed from the system and the planned full deployment of a Stroke Unit.

The main budget document devotes a significant amount of time to addressing the deficiencies of federal funding for health care. On this, the Manitoba Health Coalition and our sister organizations across the country are in agreement. The Harper-era cuts to healthcare funding to the provinces, maintained by Prime Minister Trudeau, are unsustainable. Provincial and Territorial governments are right to call on the federal government to reverse Ottawa’s declining share of healthcare spending.

However, Manitoba would be on much firmer ground if it were not deficit-spending to fund tax cuts - and if it had made any effort to maximize and invest the funding received from the federal government for COVID-19 initiatives. The government has made this funding difficult to track, as described by CCPA-Manitoba. Therefore, we recommend that a new Health Accord be negotiated with increased federal funding and clear requirements for the spending and reporting of those funds.

Fundamentally, Budget 2022 reveals a broken relationship between this government and Manitoba’s frontline health care workers and the families they serve.

This profound disconnect can be seen in the simple lack of emphasis placed on healthcare staffing in Budget 2022 - despite staggering wait times for procedures and emergency room visits. In our analysis of Shared Health’s March 15, 2022 "COVID-19 Health Recovery Plan" we note:

“Nurses - as a prominent example - have been clear that many are seeking to leave the profession. The most recent data available for Registered Nurses sees a sharp decline since Pallister-era cuts began to take hold: a decline of 500 as of 2020.

Part of the problem may lie in the government's stated objectives for the health care system in the recovery period, which the report terms "the urgency of a return to pre-pandemic operations." The government may choose to reflect that, one year prior to the emergence of COVID-19, its policies had led to what the WRHA called a "valley of despair" for health care workers. Returning to the status quo of cuts, chaos and privatization is no promised land.”

In Budget 2022, funding for nursing recruitment and retention is up by $300 thousand to $4 million per annum, as well as a welcome $11 million for increasing nursing enrolment in Manitoba’s post-secondary institutions. However, the fact is that Manitoba is spending $3 million per month on private nursing agencies. That means, education initiatives aside, Manitoba is spending 800% more on private agency nurses than on recruiting or retaining nurses in the public system.

For other disciplines, what there is amounts to thin gruel. Funding for physician recruitment and retention is flat. There is dedicated funding to hire 35 primary care paramedics (a drop in the bucket). No mention is made of home care or PCH staffing and - as noted earlier - those areas are effectively seeing cuts to their operating funding due to inflation. Allied healthcare staff receive almost no mention.

MHC continues to call for a comprehensive healthcare human resources strategy to address this ongoing crisis, with representation from frontline healthcare workers.

The Budget Speech does make some important statements toward reconciliation with First Nations, Inuit and Métis communities. It is therefore unfortunate that more urgency is not placed on health care for Indigenous peoples.

Neither the Pallister nor the Stefanson governments created this inequity. Governments of all stripes have made their contributions. From the perspective of MHC, this is a matter of necessary triage. Attention must be focused where the need is the greatest. This requires a deep commitment to de-colonizing our healthcare system - and putting fiscal resources where they are required.

In the area of mental health and addictions, we do see some progress with funding for eating disorders out of the Women’s Health Clinic. The $830,000 committed to expanding the Winnipeg RAAM Clinic and opiate agonist treatment is laudable, if vastly insufficient to address the deadly toll on our streets. It is devastating to know that more time and effort will be required by community advocates to push for a dedicated supervised consumption site in Winnipeg and for concrete action on securing safe supply. Let’s be clear - this will mean more pleading and cajoling with the provincial government to finally move on supervised consumption sites, while our friends, neighbours and family members die. In 2022, the status quo is deadly.

Budget 2022 was an opportunity for the Stefanson government to restore trust. It is frustrating that relatively simple confidence-building measures like the establishment of a Seniors Advocate and an independent public inquiry into the province’s COVID-19 pandemic response were not even considered in budget deliberations.

MHC will continue to monitor the implementation of this budget and provide analysis of its impact on our healthcare system.